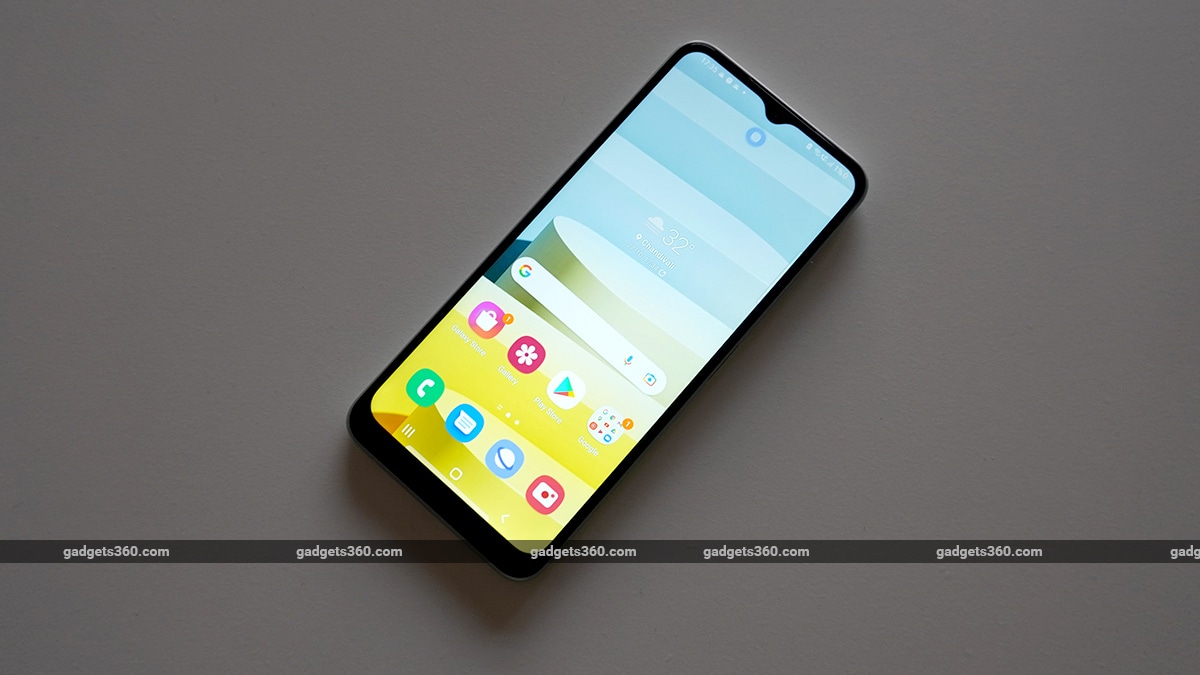 The Samsung Galaxy A22 5G launched in India around July this year, but with many other high profile smartphone launches ahead of the holiday season, it has so far slipped under the radar. Samsung has made a lot of ado about how the Galaxy A22 5G supports a wide range of 5G bands (11 total), as well as its other features like a high refresh rate display and two years of operating system updates. There’s a lot of competition for the Rs. 20,000 price point, some from Samsung’s own stable, plus newer heavyweights like the Motorola Edge 20 Fusion and iQoo Z3.

Is the Samsung Galaxy A22 5G worth the money? Let’s find out.

Samsung Galaxy A22 5G price in India and variants

The Samsung Galaxy A22 5G looks great in this mint color

The design of the Samsung Galaxy A22 5G looks a bit dated and boring. Don’t get me wrong, the fit and workmanship of the plastic is very good and this mint trim is somewhat unique. However, once you turn on the display, you’ll see where Samsung has cut costs. First off, there’s the thick black bezel around the dewdrop notch and a massive chin on the bottom, which makes the front of this phone look very dated and inexpensive. The design of the camera hump is similar to that of Samsung’s F-series, which is strange as I would have expected the more modern design we saw on the Galaxy A72 and Galaxy A52.

The Samsung Galaxy A22 5G isn’t particularly slim, but its curved edges help mask that. It’s a bit heavy at 203g, but the weight is well distributed. A headphone jack, a USB Type-C port and the speaker are lined up on the bottom. On the right side there is a recessed power button with a built-in fingerprint sensor.

Samsung has installed a large 6.6-inch LCD panel on the front, which has a Full HD + resolution and a refresh rate of 90 Hz. The quality of the display is rather average; Viewing angles are narrow and colors are not very punchy. The SIM compartment is located to the left of the display and can accommodate two nano SIMs plus a microSD card. The Samsung Galaxy A22 5G comes with a 15W fast charger, a USB cable and a SIM eject tool in the box.

Samsung has installed a MediaTek Dimensity 700 5G SoC in the Galaxy A22 5G. It’s not a particularly exciting chip, nor is it very competitive at the price point, considering the Poco M3 Pro and Realme 8 5G both use it and are significantly cheaper. The Galaxy A22 5G has Bluetooth 5 and dual-band WiFi as well as support for the usual sensors and satellite navigation systems. Samsung Pay Mini is also supported. This phone has a 5,000 mAh battery that should easily power it for at least a full day.

The Samsung Galaxy A22 5G runs One UI Core 3.1 powered by Android 11. This is Samsung’s slimmer version of the standard One UI skin and is used for its budget-conscious phones, so it’s a bit strange to see this on this model . The latest version has pretty much all of the features one would need for everyday use, but it doesn’t have certain things like Bixby, Samsung Knox, Easy Mode, etc. that you might be familiar with from previous Samsung phones. Android security was a bit out of date on my device that only had the August 2021 patch. Also, some UI features like Edge Panels, which are enabled by default on most Samsung phones, need to be enabled manually if you want to use them.

This brings us to the performance of the Samsung Galaxy A22 5G, which is a little overwhelming. The SoC achieves respectable results in benchmarks, but in actual daily use I had the feeling that something was missing. Even with this so-called stripped-down version of One UI, the user interface lacked a sense of bite. If I hadn’t checked the phone’s specs, I wouldn’t have suspected the display would run at 90Hz. However, once you’re in an app or game, everything is fine. The fingerprint sensor and face recognition worked quite well, but there were also times when they struggled, especially when trying to use face recognition in low light.

Videos look good on the display on the Samsung Galaxy A22 5G when viewed head-on, but the screen appears darker when viewed from an angle, which could be a problem if multiple people around you are trying to see something. Audio through each speaker is loud but feels one-sided. There is a Dolby Atmos software improvement, but it only works with headphones. Games took a little longer than usual to load, but went well afterwards. Heavy titles like Asphalt 9: Legends looked good. The best part is that the back of the phone barely got warm, even during long gaming sessions.

The Samsung Galaxy A22 5G is not very slim, but the back does not get too hot even after a lot of gaming

As you would expect from a phone with a 5,000 mAh battery, the battery life was pretty good. On average, I could easily last more than a full day on one charge. Watching a lot of content tends to drain the battery faster, as shown by our HD video loop test, which only ran for 13 hours and 22 minutes. Switching is not very quick, and even after an hour I noticed that the battery level was less than 50 percent.

Cameras are not a strong point of the Samsung Galaxy A22 5G, but they are useful if you are shooting in good lighting. The 48-megapixel main camera has a sufficiently large aperture (f / 1.8) for detailed close-ups and decent landscape shots. Low-light shots aren’t that great, but shooting in night mode helps a little with exposure.

The ultra-wide-angle camera only has a resolution of 5 megapixels and the image quality is absolutely average. The barrel distortion is corrected quite well, but don’t expect good detail, especially if you’re trying to crop something out of the picture. It gets worse in low light and unfortunately night mode is not supported for this camera. The third camera is a depth sensor and is used when shooting in portrait mode. There is no macro mode on the Galaxy A22 5G due to the lack of its own macro camera.

You can shoot videos up to 2K resolution with decent stabilization. Bright areas are sometimes overexposed and details are just average. You can also record with the ultra-wide camera, but only at 1080p, and you cannot switch between the two cameras while recording.

The 8-megapixel selfie camera takes decent photos once you turn off the default beauty filters, but it struggles to capture natural-looking skin tones in artificial or dim lighting.

The Samsung Galaxy A22 5G doesn’t quite offer the kind of experience most people would expect, given the price and the competition. Having a wide variety of 5G bands would be a good thing to brag about provided they could actually be used in India, but I’m pretty sure we will have several successors by the time the 5G phone comes out.

Unfortunately, there is little else to inspire with the Galaxy A22 5G. In fact, I think that Samsung’s very own Galaxy M32 5G or even the Galaxy F62 would serve you better. There’s no shortage of good competition phones either, and a quick look at our list of the best phones under Rs. 20,000 and Rs. 25,000 should offer plenty of options.

Madhav Sheth, CEO of Realme India, joins Orbital, the Gadgets 360 podcast, for an exclusive, in-depth interview while talking about the 5G Push, Make in India, the Realme GT series and Book Slim and how to do business can improve their reputation. Orbital is available on Spotify, Gaana, JioSaavn, Google Podcasts, Apple Podcasts, Amazon Music, and anywhere you can get your podcasts.